Race discrimination is still all too common in Australian workplaces, and in the provision of goods and services.

What is race discrimination?

Race discrimination is when someone is treated less favourably than someone else because of their race or ethnic origin.

For example, if someone is denied a promotion, or not hired for a job, or is fired because of their race.

Where can it happen?

Race discrimination can happen almost anywhere – not just in the workplace.

It can also happen in the provision of goods and services.

For example, when an Indigenous couple is denied service at a restaurant, in favour of another couple, when other tables are available.

It can also happen in accommodation.

For example, a real estate agent denies a young Indian couple a rental property in favour of a Caucasian couple.

Unfortunately yes, it does, and it’s more common than you might think.

For example, a talent agency recently refused to cast an Aboriginal man to play Santa in Adelaide shopping centres.

Simply posting an ad like that online is unlawful, and is clearly race discrimination.

READ MORE ABOUT THE STORY HERE

Have you worked on any discrimination cases? 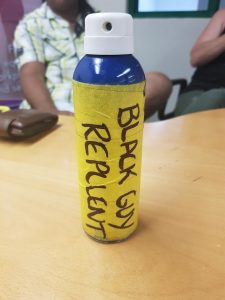 We sure have.  In fact, last year, we fought a well-publicised case of race discrimination.

It involved a worker at a car hire company on the Queensland Fraser Coast.

Our client is of Maori descent and when he asked his boss for a sunshade and sunscreen, he was told, “Nah mate, you don’t need it because you’re black.”

But the worst was yet to come.

A couple of his workmates thought it would be funny to leave a can of sunscreen for him in one of the cars he was cleaning with yellow tape wrapped around it with the words, “BLACK GUY REPELLENT” written on it, and “CAUTION! ONLY USE ON BLACKS”.

It was headed for the Federal Court when the company agreed to pay our client a hefty settlement – one of the biggest we’ve ever negotiated.

The case showed that employers allow race discrimination to happen in their workplaces, will end up writing huge compensation cheques.

READ MORE ABOUT THE STORY HERE

What can someone do if they have experienced race discrimination?

Race discrimination can have a devastating effect on someone’s mental health and well being, so make sure you talk to someone and get some support.

If you can’t talk to a friend or a loved one, you can always chat to your GP who can put you in touch with support services.

But after that, I would recommend someone who has experienced race discrimination to get in contact with a firm like ours.

Many people who suffer discrimination based on their race or ethnic origin don’t know their rights, and that’s where we can help.

We know the law backwards, and we can advise people of their best options moving forward.

Not only can we take immediate action to have the behaviour stopped, we can represent people in various courts and commissions, and can lodge claims for appropriate compensation.

Race discrimination is awful, and it’s ugly, and nobody should have to put up with it – it’s something we feel passionately about.

We fight for justice for workers from the moment they engage our services, and we don’ t give up until we achieve justice.

Anyone who is being subjected to this sort of conduct should know, there is help available.

Qantas charged after standing down cleaner who raised COVID concerns