An 88 year-old secretary has warned bosses not to pick on elderly workers, after winning her age discrimination case.

Eileen Jolly is the oldest person in the United Kingdom to take legal action for age discrimination.

An employment tribunal found her employer discriminated against her on the basis of age, when they fired her from her job as a medical secretary.

As a result, she will receive substantial compensation.

She told The Mail on Sunday:

“I feel people ought to be allowed to carry on working if they want to and can still do what is required.” 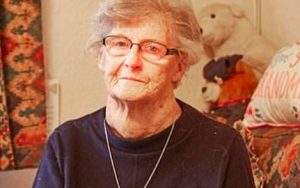 Jolly worked as a secretary for the National Health Service since 1991 at the Royal Berkshire Hospital in Reading.

However, the hospital suddenly sacked her in January 2017.

Her manager blamed her for a mix up involving a waiting list for non-urgent breast cancer treatments.

Additionally, colleagues also expressed concerns to her superiors about her age and ‘frailty’.

On the day of her dismissal, Jolly says a manager frog-marched her through an open-plan office in front of colleagues, carrying some books and her coffee cup.

“Nothing like this had ever happened in all my years of work.

“The way they treated me made me doubt myself for the first time in my life.

“I wasn’t doing well, couldn’t sleep, couldn’t stop thinking about it all.”

Jolly didn’t tell anyone about the dismissal, not even her husband or two daughters, instead insisting that she retired.

“I didn’t want to burden them all with my problems,” she said.

The truth is, Jolly wanted to keep working until she turned 90. The grandmother takes her case to an employment tribunal

The feisty grandmother, who has a heart condition, arthritis and walks with a stick, decided to fight.

She therefore made an application for unfair dismissal in the employment tribunal.

She claimed the hospital unlawfully sacked her on the grounds of age and disability.

Brendan Smith, the doctor she worked for, went into bat for her.

He described her as “reliable” and “meticulous” and claimed management used her as a scapegoat for its failings.

In the end, the tribunal sided with Jolly, and will consequently determine how much compensation it will award.

“I need to re-tarmac the driveway, so it’ll be good to have money for that,” she said.

“And the occasional margarita.”

“Our anti-discrimination laws protect workers from being treated unfairly based on their age in addition to disability,” he said.

“No one deserves to be treated unfairly, or to lose their job, simply based on the number of birthdays they have had.

“Make no mistake, we will fight for any worker who has been adversely affected based on their age or if they have a disability.”

A Rockhampton nurse who tested positive of COVID-19 is the victim of a political witch-hunt,…