A former P&O Ferries chef is suing the company for £76m ($A134m) for unfair dismissal, race discrimination and harassment.

The legal action comes after the company sacked 800 staff without warning last month.

The shipping giant will soon replace the employees with cheaper foreign contract workers.

John Lansdown started working for P&O Ferries as a 16 year-old, working as a hotel services trainee.

The company later promoted him to the rank of second chef.

He worked on the Pride of Canterbury ship, which sailed five times a day between Dover and Calais.

Lansdown has filed the unfair dismissal, race discrimination and harassment claim against the company and also CEO Peter Hebblethwaite.

The 39 year-old accuses the company of treating him unfavourably because he is British and eligible for the minimum wage.

He said his $134m claim comprises financial compensation and exemplary damages to deter P&O from repeating their actions.

He described feeling devastated by what he called his “brutal summary dismissal” after years of loyal service.

“Someone has to take a stand. And it only takes one of us. If P&O Ferries are allowed to get away with this, it will be a bellwether for the entire UK corporate landscape,” he said.

“The reputation of this once great company has been destroyed, not just in the UK but around the world.” 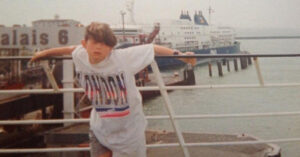 John Lansdown started working for P&O Ferries as a 16 year-old.

Background to the sackings

P&O fired all Ferries staff working on British contracts on 17 March – to be replaced by cheap foreign agency workers.

However, the shipping firm maintains the mass sackings were “categorically not based on race or the nationality of the staff involved”.

A spokesperson said in a statement:

“We took this difficult decision as a last resort and only after full consideration of all other options but, ultimately, we concluded that the business wouldn’t survive without fundamentally changed crewing arrangements, which in turn would inevitably result in redundancies.”

“We have offered enhanced severance terms to those affected to properly and promptly compensate them for the lack of warning and consultation – all staff offered these terms except Mr Lansdown have accepted this offer.” 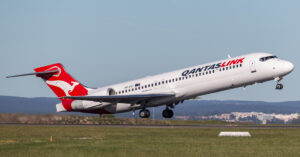 Lansdown scoffed at the offer, noting the deal required staff to sign a non-disparagement “gag order”.

“The tribunal claim I have filed is intended to bring Peter Hebblethwaite and those responsible at P&O Ferries to justice and make them accountable for their unlawful action,” he said.

“Everyone in this country has a vested interest in not allowing the unscrupulous actions of P&O Ferries to stand.” 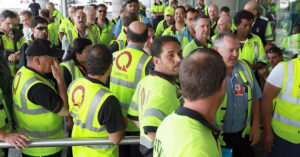 He pointed to a recent similar move by Qantas which sacked 2000 ground crew and then replaced them with cheaper contractors.

The move to outsource the jobs has saved the airline $100 million, despite the Federal Court finding it was unlawful.

Instead, he is considering the size of the penalty Qantas will need to pay to compensate the workers.

“The casualisation of the workforce is creating a class of working poor in this country,” Mr Heffernan said.

“And this is exactly why wages are stagnant. Meanwhile, multi-million dollar businesses go on increasing their profits.

“Greedy companies like P&O Ferries and Qantas should not be allowed to sack their workforce and re-hire cheaper contractors to do the same work.”