A Qantas flight attendant has lost her general protections claim after the airline terminated her employment for refusing to wear a mask.

The worker claimed wearing a mask made her feel “anxious” and “unable to perform her role safely”.

However, the Fair Work Commission found the flight attendant failed to provide “suitable evidence of adverse medical conditions” to justify an exemption.

“Jessica Watson has no medical condition of note, but she is now apparently required to wear a face mask at work. This makes her extremely anxious, and she finds she has trouble performing [her job] safely.

“I know of NO research showing any significant benefit from wearing masks, and I doubt the legality of such requirements. My advice and opinion is that she not be required to wear masks at work.”

Deputy President Nicolas Lake noted Doctor Stowell failed to provide any medical reasons to warrant an exemption – in addition to offering legal advice he is not qualified to give. 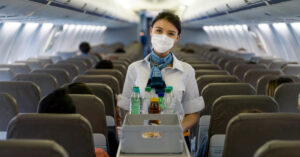 The worker claimed wearing a mask made her feel “anxious” and “unable to perform her role safely”.

Inherent requirement of the role

Watson refused an offer from NJS to wear a face shield instead of a mask.

The airline then questioned her ability to perform the inherent requirements of the job.

Qantas Doctor, Peter Prasard, told the Commission that cabin crew perform a safety critical role on board an aircraft.

He said all Qantas Group cabin crew are trained and required to perform many emergency procedures.

The duration of an emergency is unknown so cabin crew must be able to wear a mask for an extended period.

NJS sent Watson a letter directing her to attend an independent medical examination (IME) to investigate any potential medical issues.

However, she refused to take part and then refused to turn up to her next rostered shift. 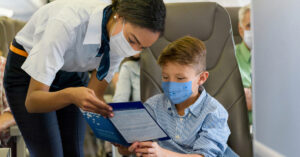 The Fair Work Commission found the direction to wear a mask “lawful and reasonable” and dismissed Watson’s claim.

Watson argued in the Commission that NJS constructively dismissed her by forcing her to resign, breaching her contract and her General Protections.

He said Qantas had a clearly documented exemption process and had offered an alternative to wearing a mask.

“The Applicant, for example, having expressed the view that she could not wear a mask was offered the reasonable adjustment of wearing a face shield instead.”

Mr Lake also noted Watson’s failure to provide any legitimate medical evidence as to why she was unable to wear a mask.

“NJS did not conclude that the Applicant did not have a medical condition that warranted an exemption. Indeed, they directed her to an IME – which she chose not to attend – to investigate same.”

Deputy Lake also found NJS “did not dismiss the Applicant, constructively or otherwise.” Instead, it told her that “if she wished to return to work, she would be required to attend an IME so that NJS could be satisfied that the Applicant could perform the inherent requirements of her role.” 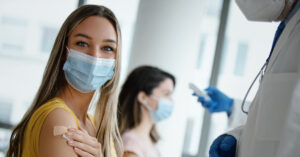 “Worker sues after being sacked for getting COVID-19 vaccine”

Qantas did everything right

Employment lawyer Stephen Dryley-Collins said Qantas did everything by the book in this case.

“The airline had a clear policy in place regarding masks and exemptions,” he said.

“It asked this employee to provide legitimate medical evidence, which she failed to do.

“The company then offered reasonable adjustments in the form of a face shield.

“And finally, when all else failed, they requested a second opinion from an independent medical examination. I’m not sure what else they could have done.”

Mr Dryley-Collins said workers who fail to comply with reasonable and lawful directions from their employer risk summary dismissal.

Cotton On reviews decision to exclude casuals from JobKeeper

Virgin announced today it is axing 3000 jobs as part of a major restructure. The…