A council CEO claims he was unlawfully terminated for making lewd comments about the mayor.

He is also accused of calling a councillor a ‘dumb f*ck’ and storing inappropriate images on a work computer.

Paul Deb is the former CEO of the Burnside City Council in Adelaide.

He has commenced legal action in the South Australian Supreme Court for unlawful termination.

He is seeking $252,232 – which is the outstanding remainder of his contract.

In a separate incident, a female colleague accused Deb of making her feel uncomfortable.

She said Deb allegedly told her he had been imagining Mayor Anne Monceaux in the shower with her husband rubbing her back.

The court did not hear details of the nature of the images, however. 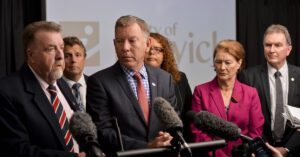 Simon Blewett, for Deb, told the court the “dumb f**k” claim and alleged inappropriate comments about the mayor would be contested.

He also said Deb and another witness will give evidence the comments were never made.

Regarding the inappropriate images, Blewett said Deb initially had a private Dropbox account.

However, he later transferred it to his work account in 2016 when the council began paying a licensing fee for larger storage.

Deb had uploaded some of the images prior to 2016, however, he added others after the Council began paying for the account.