Senator James Paterson has been accused of exploiting young people with unpaid internships in the lead-up to the federal election.

The Liberal Senator from Victoria wants university students to work for free for 10-weeks in his electorate office during the election campaign.

“Unpaid internships can be an insidious form of wage theft because they imply that a young person will receive a benefit from taking part, such as training,” he said.

“However, in reality, many employers use internships as a source of free labour.

“There are rules around unpaid work, and it appears that Senator Paterson’s program does not meet the criteria for a legitimate internship.

“In fact, I suspect he has blown his budget and, as a result, needs to con young, enthusiastic people to work for him without getting paid.”

His first ad asked the abjectly stupid question – “Do you stand for freedom? Intern in my office”.

He soon posted a second version of the ad posing an equally stupid question – “Do you stand for democracy? Intern in my office”. 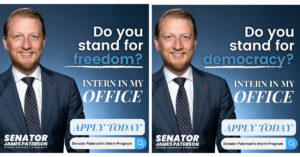 According to Paterson’s website, the unpaid internships will last 10-weeks in his South Melbourne electorate office.

They are open to students who have completed at least one year at a Victorian tertiary institute.

Curiously, all of the internships coincide with the up-coming election due to be held in May.

It is unclear how many of the unpaid positions Paterson is offering. 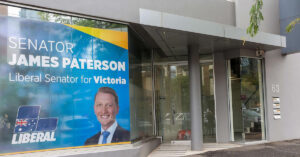 According to Paterson’s website, the unpaid interns will be required to answer phone calls, conduct research, communicate with constituents and assist at campaign events.

They will also be required to review committee reports, in addition to “other general duties as required”.

It is unclear what training or benefit the interns will receive from the program (apart from the chance to watch Senator Paterson do a media interview).

In fact, at the completion of the program, the Senator makes it clear no paid position will be offered.

Instead, he promises to write the interns a reference, “subject to performance”. 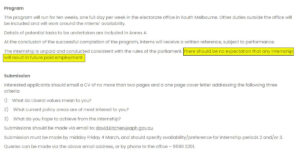 The Senator is clear that there will be no offer of employment at the end of the internship.

According to the Fair Work Act, there are only two circumstances when an unpaid internship is legitimate:

The first is when the program is a requirement of a university or college course and is also approved by the teaching institution.

The second is where an employment relationship does not exist.

An employment relationship exists when someone completes tasks for a business that a paid person would normally do.

The Fair Work Ombudsman says an employment relationship exists “when the person does activities for the business that look like work.”

“This even includes arrangements when both the person and the business:

Mr Heffernan said it is clear that Senator Paterson requires his unpaid interns to do work that a paid person would normally do.

“If you are performing tasks that benefit a business, then you must be paid for that work,” he said.

“Answering phones, talking to constituents and conducting research is work that a paid person would normally do for a politician.

“Getting young people to do that work for no pay is clearly exploitation, and is a form of wage theft – and calling it an ‘internship’ is a total con”. 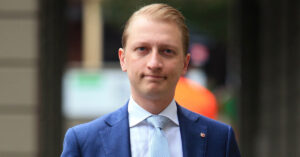 Mr Heffernan called on Senator Paterson to pay the interns, or instead ask for volunteers.

Mr Heffernan said he is not aware of Senator Paterson offering an unpaid internship program such as this during a non-election period.

“It appears that the Senator is looking for extra people to help carry the workload during the busy up-coming election campaign,” he said.

“Calling unpaid work an ‘internship’ suggests he is offering something special and of value that will provide benefit to a young person.

“But in reality, these interns will just be used for their free labour.”

Mr Heffernan called on Senator Paterson to pay the interns, or instead ask people to volunteer to work in his electorate office.

“Or better still, he could recruit more paid staff and give people proper jobs,” he said. 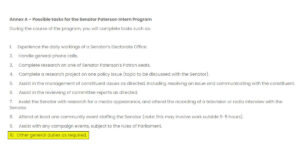 Mr Heffernan said the interns will be doing work that a paid person would normally do for a politician.

Called the “Battlelines Bootcamp”, the program promised to combine “best-practice campaign techniques with on the ground practical training”.

However, the “campaign tactics” and “practical training” supposedly on offer, were never specified.

“The evidence suggests these stingy politicians are using unpaid internships to get young people to work for free,” Mr Heffernan said.

“These interns will find themselves answering phones, stuffing envelopes with electioneering material, knocking on doors and handing out pamphlets at campaign events. 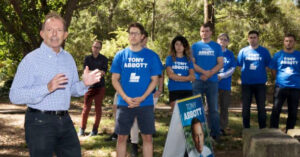 In an opinion piece published by Nine Newspapers, she warned parents not to let their children work for free:

“More companies are structuring their business models around you and I handing over our offspring rent-free.

“It’s time all Australian parents stood up and said an emphatic ”no” to the growing trend here for US-style internships.

“Too often it’s a fancy word for working for nothing.”

Meanwhile, Mr Heffernan advised anyone who completes an unpaid internship in Senator Paterson’s office to contact him immediately so he can make a wage theft claim on their behalf. 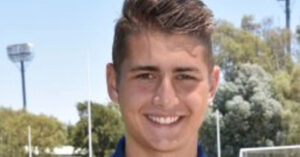