A young footballer is taking an A-League side to court after playing for the club without being paid.

He is claiming more than $60,000 in unpaid wages and damages against the club and its manager.

He claims the unpaid work left him “deeply depressed” and doubting his future in the game.

Experts believe the case could set a precedent on the lawfulness of unpaid trials and internships in Australia.

Striker Mark Moric, 19, started playing for A-League side Central Coast Mariners in April for what the club called ‘a trial period’.

He claims that Mariners coach Alen Stajcic repeatedly promised him a contract by the middle of the year.

But the unpaid trial period went on for almost four months.

Mr Moric told The Age that trial periods were a part of the game, but they shouldn’t last long.

“You don’t trial for over three months, that is ridiculous,” he said.

The young sportsman said he found it hard to make ends meet during the trial period, and had to rely on the financial support of his parents.

Then in August, he was told he was no longer needed.

Mr Moric says he is now worried about his future in the game.

“As a young person I am now in a situation where I have to give up all my hard work as a junior and stabilise myself outside of football before worrying about improving my game,” he said.

“I am taking action to not only put a stop to the clubs using young players around the country but to give myself some sense of relief that I have not done anything wrong,” he said. 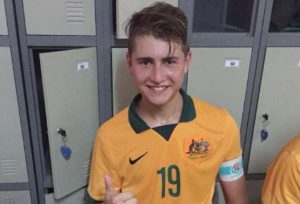 Mark Moric is suing the Central Coast Mariners and their manager for $60,000 in unpaid wages and damages.

Club says claim is ‘without merit’

A Mariners spokesman told The Age that the club was “surprised” by the nature of the claim and said they “believe it to be without merit”.

“Mark Moric was never engaged by the Central Coast Mariners as a professional football player.

“Mr Moric trialled with the club in May 2019 before a training period with the club’s National Youth League squad in July and August 2019.”

He said the club would “strongly defend” itself.

He believes the case could set a precedent.

“It’s a grey area because of the lack of clear case law,” he said.

“This could become a really important test case and not just for professional sports.”

Unpaid trials should only last a short time

“Sometimes an employer might ask a person to do an unpaid trial while they evaluate them so they can determine if they are suitable for a job by getting them to demonstrate their skills,” he said.

“But this should only take one hour, or one shift at most, and the person should be under direct supervision for the duration of the trial.

“For an unpaid trial to go on for almost four months is a joke, and I would suggest unlawful.”

Mr Heffernan says if a person is doing work that directly benefits a businesses, and adding to the profitability of the business, then they must be paid.

Mr Moric told The Age that he still wants a professional football career.

“I will always have the drive to play professionally for as long as possible but what has occurred has me often worrying about if I can reach that level again.”

Unpaid work – Are you being taken advantage of?