A worker coerced into dancing with a Kylie Minogue impersonator at a work event is suing his former employer.

The man says the incident caused “nervous shock and psychological injury” and, as a result, he’s claiming $800,000 compensation.

Worker coerced into dancing with Kylie at work event

He attended a national conference in regional Victoria in August 2015.

The event featured a Kylie Minogue impersonator performing at the company’s awards ceremony.

During the ceremony the impersonator twice called Billington on stage.

Billington alleges the performer and colleagues subsequently coerced him with “woo-hoos”.

Furthermore, he alleges colleagues physically impelled him to go on stage, despite him making it clear he did not want to. 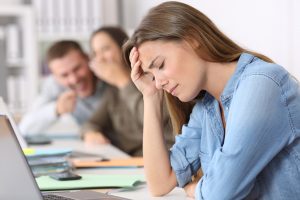 WHAT IS WORKPLACE BULLYING?

She also asked questions about his wife, despite Billington being in a homosexual relationship.

Furthermore, the performer allegedly asked him “whether he liked to wear leather hotpants” and subsequently directed him to go backstage where a female dancer dressed him in clothing he described as humiliating and belittling.

He subsequently returned to the stage where he was required to dance and sing.

As a result of the incident, Billington claims he experienced a number of psychological injuries, for example:

“As a result of the said injuries the plaintiff has since only been able to work over the phone with limited face-to-face contact working a maximum of 18-hours a week.”

He is therefore asking the County Court to award him $800,000 special damages for lost past and also future income.

It argues he got on stage of his own volition and, to the extent that he may have been compelled, it was not reasonably foreseeable he would suffer a psychiatric illness.

The matter is listed for a directions hearing on March 5.

Are you entitled to flexible working arrangements?

Workers with various personal responsibilities are entitled to flexible working arrangements, according to experts. As…