For example, fighting bushfires or working for the SES.

The right is listed under provisions in the Fair Work Act.

It is known as emergency management leave or community service leave.

However, there are some conditions attached to taking the leave.

For example, the worker must provide evidence to their employer that they qualify to take the time off.

When can someone take emergency management leave?

According to the Fair Work Act, an employee can take leave for emergency management activity if:

Furthermore, the employee must be a member, or has a member-like association with, a recognised emergency management body. 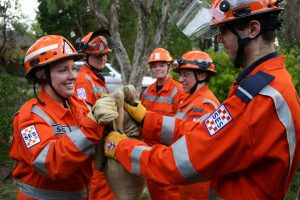 The State Emergency Service is a recognised emergency management body.

There is no limit to the amount of leave

There is no limit on the amount of leave an employee can take while volunteering for emergency management work.

However, they must actually be doing the work.

Additionally, travel time and a reasonable rest period at the end of the emergency work is part of the entitlement.

What does a worker have to tell their boss?

An employee who takes community service leave must let their employer know as soon as possible that they will be taking the leave.

In addition, they must also tell the employer the period of time they expect to be absent from work.

An employer can ask their employee to provide evidence of their eligibility for the community service leave. 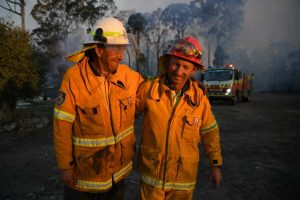 As a result of public pressure, Prime Minister Scott Morrison has agreed to pay some volunteer firefighters.

Self-employed workers, or employees in small or medium size businesses are eligible to claim $300 a day, up to a maximum of $6,000.

“Scott Morrison’s leadership during this bushfire crisis has been hopeless and woeful.

“As a result, the anger and criticism he is receiving on the ground is well deserved.

“He clearly has no grasp on the enormity of the catastrophe.

“There’s a reason why he’s now known as “Scotty from Marketing” and “The Liar From The Shire” – because his complete lack of leadership has been exposed during this national emergency.”

Mr Heffernan said he doesn’t think volunteers should be paid, but the current bushfire emergency is an exceptional circumstance.

“The reality is that this is a very extreme situation – and this isn’t people doing minor work – these are people holding a hose fighting a wall of fire – some have been doing it day after day for weeks on end – so on this particular rare occasion, as a one off, they deserve to get some small compensation while their lives are on hold,” he said.

To contact our team at Fair Work Claims, please call

Unpaid work – Are you being taken advantage of?