Victoria Beckham has been slammed on social media for standing down 30 staff, despite a family fortune worth $A650 million.

In addition, she is claiming the British government’s 80 percent wage subsidy for her workers.

Victoria Beckham owns her own struggling high-end fashion label that charges $3,000 for a dress.

Launched in 2008, it is propped up financially by her husband David.

Victoria sent a letter to staff telling them they will receive 80 percent of their salaries from the government.

She promised to ‘top up’ the remaining 20 percent.

However, the move has angered fans and celebrities, including Piers Morgan and Ricky Gervais.

The Beckham’s recently bought a $33 million penthouse in Miami, in addition to other examples of extreme wealth.

For example, the former Spice Girl owns a collection of Hermes Birkin handbags worth $2 million.

And furthermore, during a visit to Paris earlier this year, Victoria ordered a $4,000 bottle of red wine. 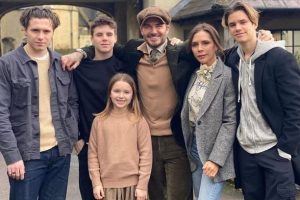 The Beckham’s are worth $650 million.

After David and Victoria appeared in a video thanking healthcare workers in the Global Citizen One World Concert, Morgan tweeted:

“Sorry, but this makes me puke.

“If you care this much about the NHS, @victoriabeckham — then why are you taking taxpayer money the NHS desperately needs — and you DON’T need to furlough your staff & prop up your failing business.”

“At a time when millions are struggling, it would be good if multi-millionaires helped the country rather than seeking to profit from hard-pressed taxpayers.”

Comedian Ricky Gervais also joined the criticism when he “liked” a tweet from a disgusted fan called Tony:

“The f***ing Beckhams, sorry I’m done with them now. Shame on them.”

JobKeeper available from this week

The scheme involves the government paying business $1,500 a fortnight for each worker.

More than 275,000 businesses have applied for the scheme.