There are calls for Network Ten to sack George Calombaris as a Masterchef judge after it was revealed the celebrity chef had underpaid workers at his restaurants by almost $8 million.

Calombaris’s Melbourne-based Made Establishment company was fined $200,000 by the Fair Work Ombudsman after a four year investigation revealed a failure to pay proper award rates, penalty rates, casual loadings, overtime and other allowances.

Made Establishment said it discovered the unlawful payments during a review in early 2017, following a change in management.

It reported the underpayments to the Fair Work Ombudsman which confirmed that employees were wrongly classified and underpaid due to incorrect processes and failures across its payroll and human resources systems.

It has now entered into an Enforceable Undertaking with the workplace watchdog which requires Calombaris to implement new payroll and compliance systems across his restaurants, including Hellenic Republic, Gazi and Jimmy Grants.

Calombaris has previously been made to back pay $2.6 million to more than 160 employees after media reports revealed he had underpaid overtime for up to six years.

‘Truly shocked’ at the extent of the wage theft

“We are truly shocked at the full extent of wage theft at Made Establishment,” she said.

“If someone deliberately took $1,000 out of someone else’s bank account, there would be a high likelihood of a criminal conviction for theft.

“But when you’re a multimillionaire restaurateur / celebrity chef you can take $7.83m in wages from your workers and get away with a ‘contrition payment’.

“And you get to keep your TV show, your huge profile and mansion and keep raking in cash off the back of hardworking chefs, waitstaff and bartenders.” 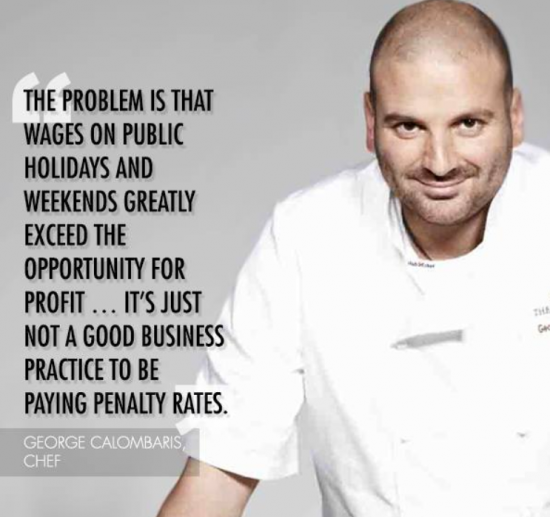 “This scumbag was one of the most vocal advocates for slashing Sunday penalty rates, crying poor that they were preventing him from making a profit – when all the while he wasn’t even paying them – what a disingenuous dishonest low-life thief,” he said.

“If one of his employees stole $8 million from the company safe, they would be sent to jail and have a criminal conviction, but this bloke gets to walk away with a $200,000 fine – what an absolute joke!

“It’s time for Network Ten and Masterchef to take a stand against the exploitation of workers in the hospitality industry by sacking George Calombaris as a judge.

“He doesn’t deserve to be on television promoting himself and his restaurants – he deserves to be exposed for the rip off merchant that he really is.”