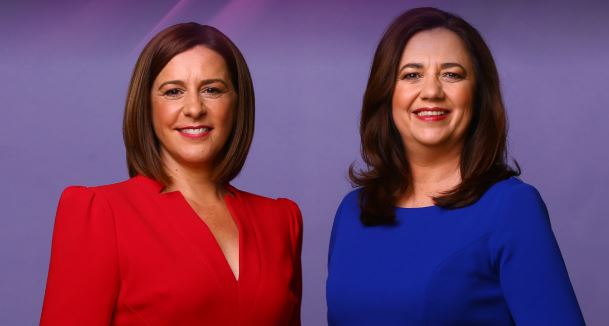 But not everyone believes the day is credible, or even useful, with one commentator hitting out at what she says is the tokenistic nature of the day – even arguing that it does nothing to help the cause of women.

No other state in Australian political history has been able to boast a female premier and a female opposition leader at the same time.

Annastacia Palaszuk Deb Frecklington told The Courier-Mail that as young girls, there were no female role models to look up to in politics, and the thought of a female Premier never entered their minds.

“Now little girls come up to me all the time, and say they want to be Premier one day – or Prime Minister – and I think that is just wonderful,” Ms Palaszcuk said.

“I think when young women look at Queensland Parliament and see two women leading their parties, it says a lot to them about what’s achievable,” she said.

This year’s International Women’s Day theme is “Balance for Better” supporting gender representation across all fields and professions, but not all women are celebrating.

International Women’s Day ‘not credible or even useful’

Lucy Carne, the editor of Rendevous.com.au, has hit out at International Women’s Day, describing it as “not credible or even useful.”

In an opinion piece published in The Courier-Mail today, Carne says that “this 108-year-old, UN-instated, 24-hours of tokenistic hand-holding has achieved … nothing.”

“We still earn less than men — 21.3 per cent less for doing the exact same job, according to the Australian Government’s Workplace Gender Equality Agency,” she writes.

“Every year it is the same: a flurry of purple cupcakes, photo shoots of female athletes and the naive excitement that we can march into work and smash the glass ceiling with a roundhouse kick of our stilettos,” Carne writes.

Carne points out that women are half the population – not some special subgroup like redhears or Game of Thrones fans who need a special day of the year to be ‘celebrated’ with purple cup cakes.

“It disparages issues that need attention.  Violence against women, against anyone, is sickening. Mental illness, depression and suicide levels are concerning for all people.  Discrimination against any person is wrong,” Carne writes.

“Setting ourselves apart by our gender, as though we are more special and more important, only sets us back.

“This militant advocacy of the sisterhood only encourages inequality.” “I’m not so sure that I would be as critical as Ms Carne about International Women’s Day – if nothing else, it brings attention and shines a light on the real issues like the gender pay gap, discrimination and sexual harassment,” he said.

“To suggest that nothing has been achieved since the first International Women’s Day isn’t really true – we have seen the gender pay gap closing, we have tough laws in place to protect against discrimination and sexual harassment and the #MeToo movement has swept the world.

“Even though there is still much to be done, I would argue that we have been heading in the right direction.

“No one is suggesting that eating some purple cup cakes once a year is going to solve any major problems, but if the day encourages people to have conversations, and bosses to think about issues affecting women, then I think that is a good thing.”

If you have experienced sexual harassment, or discrimination on the basis of your sex, you may be entitled to compensation.