Deb Frecklington has been criticised after suggesting she would make a better Premier than Annastacia Palaszczuk because she has children and shops at Target.

The state opposition leader made the extraordinary comments for a profile piece in News Corp’s The Sunday-Mail.

Frecklington described her political opponent as “‘Princess Palaszczuk” for wearing suits that cost more than $1,000.

Additionally, Frecklington made a cruel and nasty jibe at Ms Palaszczuk’s publicly-known battle to have children.

The Premier has spoken about her miscarriages and undergoing IVF treatment.

However, that didn’t stop Frecklington telling The Sunday-Mail she is more grounded because she has three kids.

“I have no choice but to remain grounded, because of (husband) Jason and the girls.

“I can have a tough day but then I’ll get a call from one of my kids and you’ve got to deal with whatever’s going on in their lives. She, on the other hand, has had a complete makeover – all the makeup, the designer labels, it’s too much, when there are bigger issues to focus on.”

“To have a go at a political opponent for being so-called ‘barren’ is cruel and unnecessary,” he said.

“This is a politically tone-deaf and has turned into a spectacular own-goal by Ms Frecklington, who should know better if she has ambitions to be Premier.” 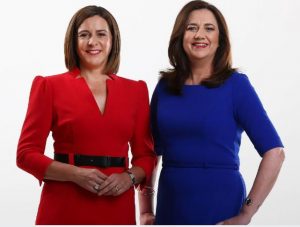 The article set off a social media storm with many of the Twitterarti accusing Frecklington of having “a cheap shot”.

Others described her comments as “desperate and immature”.

“The last time I saw this level of meanness was actually in the movie Mean Girls.”

Federal Labor leader Anthony Albanese also wrote online that Frecklington’s comments about Ms Palaszczuk were appalling, pathetic and unbecoming of someone who wanted to be Premier.

State Police Minister Mark Ryan said it shouldn’t matter what clothes someone wore, but how they did their job:

“What her comments clearly show in mind is that she’s mean, she’s nasty, she likes to pick fights with people.

“I admire the Premier greatly. She’s a lady who not only speaks from the heart, but acts from the heart whenever it comes to her fellow Queenslanders.” 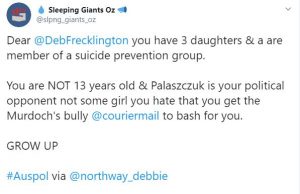 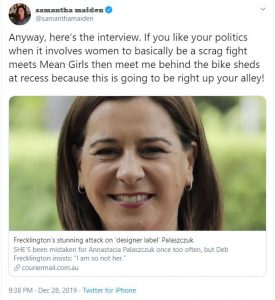 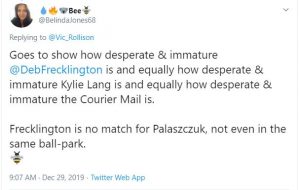 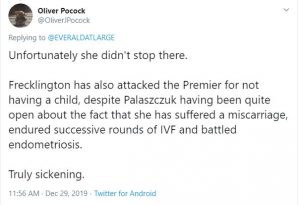 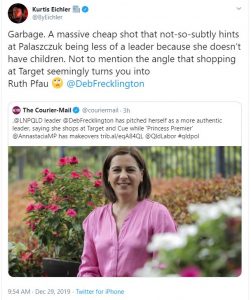 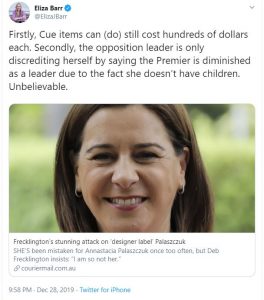 LNP favourite to win next election

Queenslanders are set to go to the polls on October 31 next year, and the LNP is currently favourite to win government.

Frecklington told The Sunday-Mail that she is nothing like the current Premier.

“She has deliberately changed her image – the whole ‘Princess Palaszczuk’ is pretty obvious – but I haven’t changed mine.

“And I’m still exactly the same person who puts the thongs on and goes to Woolies on a Saturday morning because I’ve run out of milk.

“With me, what you see is what you get.”

Court rules that endometriosis is a disability – Discrimination Claims

For specialist help and advice, please call our team at Fair Work Claims today on

Have you experienced menopause discrimination?