Channel 7 has dumped Michael Slater from its commentary team after he criticised Scott Morrison on Twitter.

The former Australian Test batsman has been with the Network since it took over broadcast rights in 2018.

However, news.com.au reports he has failed to secure a new contract for the upcoming 2021/22 summer of cricket.

Slater hit the headlines earlier this year when he infamously slammed Scott Morrison’s decision to block citizens from returning to Australia from India.

“If our Government cared for the safety of Aussies they would allow us to get home. It’s a disgrace!

“Blood on your hands PM. How dare you treat us like this. How about you sort out quarantine system.

“I had government permission to work on the IPL but I now have government neglect.

“And for those who think this is a money exercise. Well forget it. This is what I do for a living and I have not made a penny having left early.

“So please stop the abuse and think of the thousands dying in India each day. It’s called empathy. If only our government had some!” 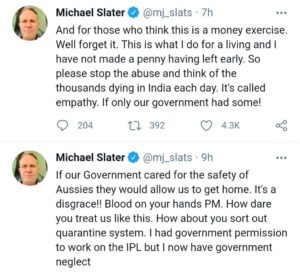 Morrison, famous for having a glass jaw and unable to accept responsibility for anything, described Slater’s accusation as “absurd”.

News.com.au reports Slater’s controversial outburst did not sit comfortably with cricketers in addition to Channel 7 executives at the time.

In a bid to hose down the controversy, Channel 7 Head of Sport Lewis Martin suggested Slater’s effective sacking was the result of budget cuts.

“Unfortunately business decisions have to be made from time to time and unfortunately we’re not in a position to renew it (Slater’s contract).”

Employment lawyer Stephen Dryley-Collins from Fair Work Claims said the case is reminder of the dangers of social media for employees.

“Always assume that your employer is going to read your social media posts and possibly take action against you because of them,” he said.

“When making comments on social media, it’s best not to make any disparaging comments about your current employer, or past employers, because these things can follow you around.”