There are calls for food delivery platforms to slash their commissions of up to 30 percent, as Australia’s dine-in restaurants face total wipe out.

Uber Eats, Deliveroo, Menulog and DoorDash are experiencing a boom in the $1 billion food delivery market.

This is a result of people staying home and using online delivery instead of visiting dine-in restaurants during the coronavirus outbreak.

The federal government looks set to close restaurants and bars within days, following similar moves by Italy, France and parts of the United States.

A petition calling for the food delivery platforms to cut their commissions has reached 35 thousand signatures.

The Restaurant and Catering Industry Association is pushing for rent abatements and a Newstart-style allowance to retrain workers.

“The delivery platforms are high volume but low profit.

“They are on about 3 percent profit margin, so the three major players are making about $24 million in total.

“If they go out of business that option goes away.

“We would like to see the federal government, instead of paying people to sit at home, paying hospitality employees through a Newstart-style allowance to undergo training, micro skills, TAFE and VET courses.”

“THE NEXT CORONAVIRUS CRISIS: WE’RE GOING TO RUN OUT OF BEER” 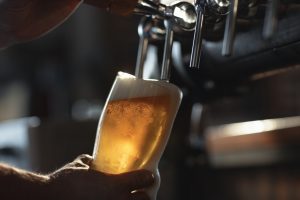 The food platforms have all announced support packages in addition to contactless delivery.

Despite this, they refuse to cut their headline commissions, which ranges from the high teens for McDonald’s, Hungry Jack’s and KFC to as much as 35 percent.

“We are not in a financial position to reduce commissions,” Deliveroo’s Australian CEO Ed McManus told AFR Weekend.

For example, he points to the after-tax loss of Uber, Deliveroo and Menulog in Australia last year.

Uber Eats announced a $5 million fund and said it will make daily payments to restaurants, rather than weekly.

Additionally, it is removing service fees on pick-up orders until June 30.

Menulog has halved commissions on all pick-up orders and waived all activation fees.

DoorDash says restaurants can sign up for free with zero commissions for 30 days.

Furthermore, it is scrapping commissions for pick-up orders, in a land grab for market share in the fast-growing $872 million Australian market.