The national minimum wage increased by $13 a week today, however, its implementation will be staggered.

Group one awards will receive the increase today, group two from 1 November and group three from 1 February 2021.

It applies from the first full pay period starting on, or after today.

As a result of the current COVID-19 pandemic, Fair Work decided to implement the increase over time.

Group one awards will receive the increase from today.

Group two awards will receive the increase from 1 November.

Group three awards will receive the increase from 1 February 2021.

Click here to find out when your award will increase.

Increase applies to those on Jobkeeper

The new minimum wage applies to any work an employee performs while they’re on JobKeeper, if their pay rate is set by an award or the national minimum wage. 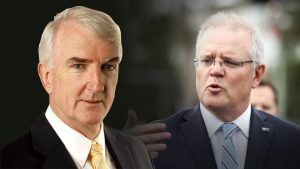 Finance guru Michael Pascoe writing in The New Daily says some people on the new minimum wage will be worse off if they work extra shifts, thanks to a complex tax system.

For example, a single person on the minimum wage working three shifts a week would actually drop $8,800 a year if they take an extra shift.

They would cop an effective marginal tax rate of 212 percent, writes Pascoe.

“A single person working five shifts a week on the minimum wage will take home an extra $9.30 out of the Fair Work Commission’s $13-a-week rise, while the government pockets $3.70. (That’s the figure I used – a rise of less than $2 a day.)

“But the government gets more of that FWC rise than an individual working one, two or three days a week.

Everyone, including Pascoe, agrees the previous Newstart payment of $550 a fortnight is way too low.

Everyone, except the Prime Minister and a cohort of Liberal and National party politicians, that is.

With unemployment remaining high, Pascoe argues JobSeeker needs to be higher but with a more generous taper rate to remove the disincentive to work.

And he says the minimum wage will also need more support.

“It’s not the stuff of tabloid headlines and simplistic political sloganeering.

“But it’s what the country and more than a million unemployed Australians need.”

A security guard sacked by text message has been awarded $12,500 compensation. The Fair Work…